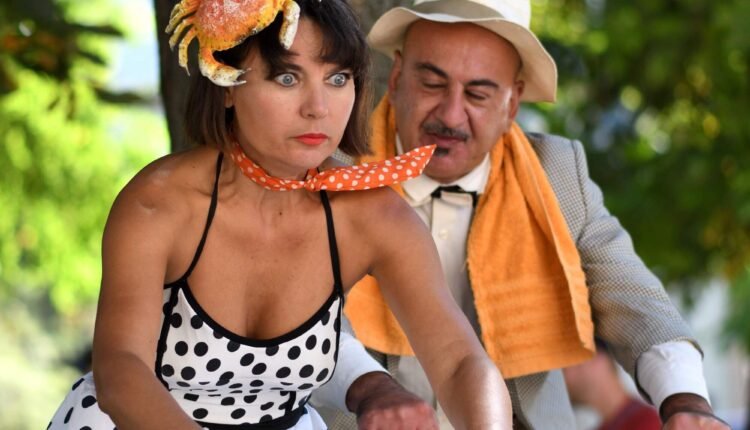 In this performance, the Astronauts team is tested in one of Anton Chekhov’s and the world theatre’s masterpieces, “A Marriage Proposal.”

The play premiered in May 2014 in Athens and then toured all over Greece where it was presented in many different and unexpected venues including nursing homes. It is worth mentioning that the show also toured abroad (Argentina, Uruguay, Cyprus, Poland, Czech Republic) where the audience embraced it very warmly.

The story is as follows: Ivan Vasilevich, sets out on a beautiful summer day to go propose to the woman of his heart. He meets her by chance in the countryside. He desperately tries to formulate the proposal and she desperately tries to show him how much she wants him. But some misunderstanding insists on popping up at the exact moment it shouldn’t, sometimes over an estate and sometimes over a dog, until the unspoken proposal nearly “kills” the prospective groom!

Anton Chekhov’s one-act play in an unpredictable stage adaptation, tender and hilarious at the same time, is performed with skill by Froso Zagoraiou and Ntinos Pontikopoulos. In bars and other unpredictable spaces, they unfold before our eyes meadows, lakes and dog “pageants” with the exciting form of improvisation. At the same time, Antonis Skamnakis performs live, combining modern technology (looping) with acoustic sound, bringing one of the oldest instruments of western music (tenor viola da gamba) to the stage.